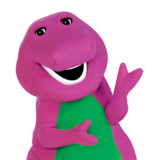 It has often been said that the ultimate purpose of rock & roll, in all of its many mutations, is to annoy one's parents; if that's true, then Barney may well be the ultimate rock & roller. Of course, as a purple dinosaur aimed directly at the toddler market, Barney lacks considerable street credibility, but perhaps no musical entity in years has proven quite so irksome to parents, let alone anyone else with the ability to cut up their own food; young children love him unconditionally, and as a consequence, he has risen to enormous popularity, with any number of records, books, and videos bearing his image. Created by mother and former teacher Sheryl Leach, at its peak, Barney's eponymously titled program was the most watched preschool series on public television, garnering audiences of 13.5 million viewers weekly and appearing in 20 countries on six continents. Acclaimed by educators for its educational value as well as an interactive format encouraging its very young audience to participate in various musical and dance segments, the series spawned a cottage industry of toys and other merchandise, including such LPs as 1995's Sleepytime Songs, 1996's Fabulous Funtime Tales, and Sleepytime Slumber Stories, and 1997's Run Jump Skip & Sing. Perhaps Barney's best-known song was the much-parodied singalong "I Love You, You Love Me," which epitomized the show's simple, gentle approach. ~ Jason Ankeny, Rovi