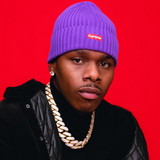 Charlotte, North Carolina native “DaBaby” began rapping in December 2014. In January 2015, with less than a month of experience as an artist, he went on with the release of his debut mixtape titled, “NonFiction,” under the name “Baby Jesus.” This release acquired over 10,000 streams, in the first 48 hours, with no promotion, outside of posts on his Instagram account. DaBaby’s buzz quickly spread throughout Charlotte and the surrounding areas, becoming the fuel that eventually ignited DaBaby’s contagious brand and subsequent music career.   A few months later, DaBaby booked a spontaneous flight to Austin, Texas, for “SXSW 2015,” where he received the opportunity to perform his new music, on seven different stages, over the course of three days. What everyone then learned was that ‘DaBaby’ wasn’t just another local rapper who happened to put out a great project, but was also a fearless performer. With no prior performing experience, let alone speaking on a microphone period, DaBaby was a standout performer, amongst the masses. By the time SXSW ended large crowds were chanting the lyrics to his single “Baby Jesus,” some even approaching him for autographs. DaBaby acquired a numerous amount of fans, from all over the country, during SXSW, which turned into a cult following