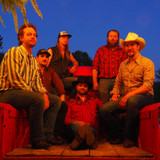 Les Gruff and the Billy Goat

A new generation of Midwest Country music, St. Louis’ Les Gruff and the Billy Goat released their third album on December 8, 2018. Their sound, driving like a barge and rolling like a riverboat, defines a genre the band has affectionately deemed “River Dirt.” Akin to its cousins in the Oklahoma and Texas Red Dirt genre, River Dirt perfectly captures the roots, rhythms, and reflections of life in historic middle America. The eponymous album demonstrates the maturity of a band that has spent years touring extensively in Texas, the Midwest, and beyond. Lead singer Billy Croghan originally formed the group out of personally challenging circumstances after losing his father – the man who gave him his first guitar – in a highly-public suicide. Mixed with grief and the growing pains that come along in one’s mid-twenties, the band wrote this collection of songs at its inception. Armed with a whole new perspective after years of performing and traveling together, the band has polished this album of toe-tappers and lovers’ laments into a precious gem ready for release into the now booming Americana scene. Les Gruff and the Billy Goat have been regularly touring through IL, MO, OK, and TX, performing with bands like Mike & the Moonpies, Justin Wells, Mayeux and Broussard,