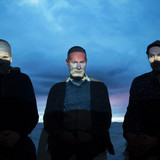 A Finnish techno act which received their nation's equivalent of a Grammy for Jazz Group of the Year, RinneRadio incorporate the improvisation and intelligence of jazz while maintaining the energy and futuristic vision of electronic music. Formed by saxophone player Tapani Rinne, programmers Kajasto and Jari Kokkonen, DJ Ken One and mixer Smoju, the quintet debuted in 1988 with a self-titled LP for Finland's Leo Records. Dance and Visions followed in 1990 for Pyramid, after which RinneRadio moved to the Aani label. The group's pair of albums on the label (1992s' Joik and 1994's Unik) showed increasing hip-hop influences. At one live show in 1994, staged by the international Symposium of Electronic Art, RinneRadio played live while a DJ manipulated an on-the-fly mix of their material in another room and group visual programmer VSA provided real-time visuals; impressed by the performance were several British CD-ROM producers, who recruited the group for the Virtual Nightclub project. By 1995, RinneRadio had moved to Rockadillo Records, which released their fifth album Rok early the following year. ~ John Bush, Rovi