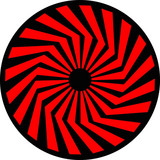 The Helmholtz Resonators are a renegade group of spaced-out psychedelic audio scientific oddballs who have been playing and writing music together since the turn of the century. Live multi-instrumentalists, dream weavers and time travellers. They studied acoustic science and the work of Hermann Von Helmholtz, being particularly inspired by his series of works 'On the Sensations of Tone...', essential reading for anyone interested in the science of sound and sound synthesis.   A bunch of frustrated drummers at heart, when writing debut album ‘The Crystal Submarine’ they made sure that they each had a go at the drums on at least one song per band member - resulting in eclectic live shows and rhythmically tremulous music.   Heavily inspired by the ethos behind concept albums, the band have created a repertoire of songs that are as eccentric as their image, touching on influences as diverse as The Doors, The Bonzo Dog Band, CAN, The Flaming Lips and LCD Soundsystem and picking up support from the likes of Trashmouth Records, Marc Riley (who invited them in for two live sessions!), Steve Lamacq, Eddy Temple Morris and Frank Skinner.