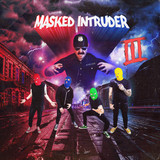 Although the members of Masked Intruder keep their identities hidden under ski masks, the mysterious band's sugary sweet pop-punk shows that they wear their hearts on their sleeves. Calling Madison, Wisconsin, home, the quartet rose in the early 2010s, label-hopping between Red Scare and Fat Wreck for their first two LPs, which were interspersed with a healthy number of EPs and split singles. Eventually settling in with Pure Noise Records, they returned with III in 2019. Claiming to have formed in jail, the band -- who go by the anonymous handles Intruder Blue (vocals, guitar), Intruder Green (guitar, vocals), Intruder Yellow (bass), and Intruder Red (drums) -- have a sound that finds them adding a criminal edge to their yearning melodies, evoking the Bay Area pop-punk of bands like Green Day and Mr. T Experience. Masked Intruder made their debut with a self-titled album released by Red Scare Industries in 2012. A series of split singles followed over the next year, including The Wedding 7" with Dan Vapid and the Cheats and Red Scare Across America with Elway and Sam Russo. In 2013, Fat Wreck Chords signed Masked Intruder and reissued their debut, followed the next year by their sophomore effort, M.I. Their time with Fat Wreck would prove to be short lived; in 2016, they moved over to another California stalwart, Pure Noise Records, and released the EP Love and Other Crimes. Another three years passed before the same label issued Masked Intruder's third full-length, III. ~ Gregory Heaney, Rovi