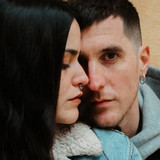 Love Syndicate is a duo of producers and djs from Zaragoza (SP) formed in early 2019 by Jaime Lacoma and Frankie Custardoy. In September of that same year they released their first single "Higher" with the vocalist Eva McBel, a single that allowed them to quickly open up in the world of clubs and different radio stations in their country. At the end of that same year Lacoma decided to leave the project to focus on his solo career and unexpectedly enters to complete the duo the photographer, visual artist and producer Divina after spending a studio session working with Frankie for what would be a supposed collaboration, there is born the second single of the renewed group: "Red Lines". Strongly influenced by Drum & Bass, Jamaican music, House sound, Pop or R&B among others Love Syndicate has no boundaries, in each song you can perceive the essence of the band; the love of the club for their blunt mixes, the presence of real instruments, the power of their bass lines and the love for their drum grooves but the really nice thing about this project is that you never know what the next Love Syndicate will bring.