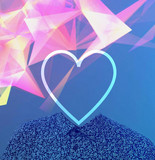 2020 is the year Alexander Heige decided to start his journey to release one song every month until the end of the year.   Alexander is a swedish pop musician/producer and everything started back in the 90’s when he as a small child picked up his uncle’s acoustic guitar and made noises. Since then he started learning drums as a teenager and quickly noticed his talent behind the kit. Alexander played drums and started to sing lead vocals in the swedish indie rock band Pixie Machine and became the mixing engineer of the band. Time went on and he decided to start learning how to produce music on his own and fast forward to 2019 when his first pop single Vägar released. - Bob 2020   Instagram: @alexheige instagram.com/alexheige