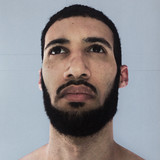 Multi-disciplinary artist Louis Carnell spent a decade working under the alias Visionist. His work evolved from its early stages as an exploration of underground club culture, a reflection of Louis’ environment as a Londoner and an investigation of the post-internet world, to something more interrogative and personal in its manner. Louis’ willingness to be unguarded saw him at the forefront of tackling themes of anxiety, and the connotations of masculinity and race. Louis’ work as Visionist included albums on PAN (Safe 2015), Big Dada (Value 2017) & Mute (A Call To Arms 2021), and his meticulous attention to the visual world lead to collaborations with Peter De Potter, Daniel Sannwald and Frederik Heyman. In September 2021 Louis Carnell announced the parting of ways from his Visionist alias. The decision to move forward from his alias in favour of his birth name declares an exciting new pathway in which Louis has given himself the breadth to experience freedom, a space of no distraction or compromise.