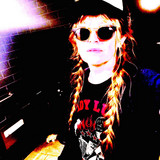 Anne McCue is an Aquarian who hails from west of Sydney, Australia. Her first band was with some mates from school - Karen D. and Alison ? - and was called Vertigo. McCue then moved to Melbourne and joined the band Girl Monstar who toured for 5 years. She has made 7 solo albums to date and a live DVD and is currently working on her latest recording which is inspired by David Bowie's song 'The Man Who Sold The World.' It will be produced by Jane Nightshade, the main character from her forthcoming novel. She likes collaborating with other artists and has a new project with Joseph Lekkas from Palm Ghosts called Radios In Motion. Anne plays guitar on Robyn Hitchcock's latest release ( Robyn Hitchcock , Yep Roc Records). She has produced albums for other artists including Ellen Starski'sThe Days When Peonies Prayed For The Ants , Scott Miller's Ladies Auxiliary and Emma Swift's eponymous release. She is host of the radio show Songs On The Wire on WXNA FM, Nashville. Alternative Country icon Lucinda Williams has said of McCue: “Initially, her stunning voice hooked me in. Then I got inside the songs. The first chance I got, I went to see her perform . . . I was floored!" Meanwhile Anne is generally contemplating the meaning of existence. www.annemccue.com