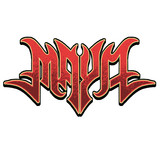 Maya emerged in the summer of 2004 in San Jose, CA. Their formative years launched them to the same stage as some of the biggest names in hardcore as they prospered into prominent figures in the SF Bay Area local scene. Their close-to-home fan base quickly expanded to reach across the world, which led to opportunities to tour across the country and throughout Latin America alongside heavy hitters including Terror, The Acacia Strain, Emmure, and more. These days, the band is tapping into their heritage to share their stories as first generation Mexican and African American musicians from Northern California. Their musical identity is fueled by DIY ethics, respect for their roots, and the determination to share the music they love with a culture that hasn’t always understood it. Their struggle is their inspiration. After two successful album releases to build their name, (Things Get Worse Before They Get Better, Rebel Alliance) the band has found their distinctive voice in the fierce world of hardcore and metal with their new record DESPIERTA (Awakening) due to release July 15, 2021 on Shark City Recordings. Website www.maya408.com