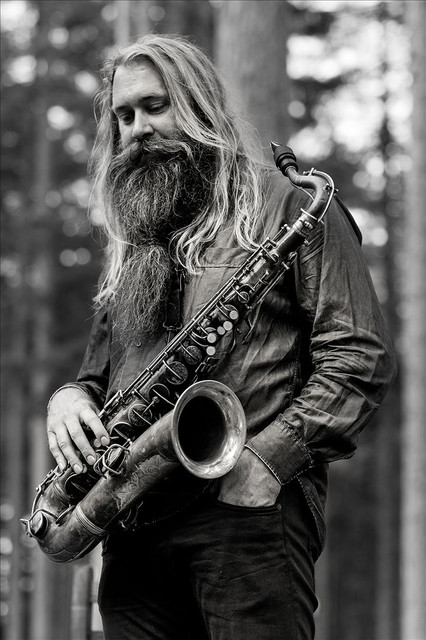 Norwegian saxophonist and composer Trygve Seim is best known to English-speaking audiences for his recordings as a sideman and leader on the ECM label. But in his native Norway, he is considered a prolific recording artist, collaborator, and curator of sound. In Europe and Asia where his catalog is far more extensive, he is a nearly ubiquitous presence on the festival circuit as a soloist, bandleader, featured composer, and sideman. His membership in guitarist Jacob Young's quintet has spread his reputation to the U.K. and U.S. as well. Seim's 2004 date Sangam was widely celebrated for its fusion of jazz, international pop, and modernist styles, while 2010's Purcor: Songs for Saxophone and Piano, paired him with pianist Andreas Utnem, a longtime associate to duet on various original and traditional compositions. Choosing from a mix of liturgical compositions for mass and some original pieces, Utnem played in his own classical- and jazz-based style while Seim improvised around him. The result was a critically regarded hybrid of classical, jazz, and folk styles. Seim was born in Norway in 1971 and began playing saxophone in 1985 after hearing Jan Garbarek's Eventyr album. That tone has followed him down through the decades, but Seim's approach is warmer and sparser than his great influence's. He studied at the famed Trondheim Musikkonservatorium with Edward Vesala and Terje Bjørklund in the early '90s. In 1991, he and Christian Wallumrød (a fellow student) formed the quartet Airamero with bassist Johannes Eick and drummer Per Oddvar Johansen. The saxophonist also joined Jon Balke's large band Oslo 13 in 1992. Eventually, he became one of its co-leaders. Airamero issued a lone self-titled album in 1994. Through the rest of the '90s, Seim played on records by Motorpsycho, Jacob Young, Squid, and Odd Nordstoga, to name a few. He also co-founded the Source with Johansen, Øyvind Brække, and Mats Eilertsen, an ongoing concern. The saxophonist issued his ECM leader debut Different Rivers in 2001, followed by The Source with Different Cikadas (with Brække and Johansen), Wallumrød's Sofienberg Variations, and Balke's Magnetic North Orchestra on Kyanos in 2002. Sangam, his next album as a leader, was issued in 2004. In 2006, the Source issued its self-titled album. Seim joined Sinnika Langeland's "Starflowers" group that year -- as did Arve Henriksen and Anders Jormin. Her 2007 album of the same name marked the initial collaboration of a band that has continued to tour and record. Seim followed with two more collaborative, co-headline albums: Yeraz with accordionist Frodi Haltli was released in 2008, and Purcor with Andreas Utnem came out in 2010. Over the next five years, he recorded with the Source, and appeared on albums by Manu Katche and Arild Andersen, among others.

2016 proved prolific for Seim: He contributed to Iro Haarla's Ante Lucem, Eilertsen's Rubicon, and Langeland's The Magical Forest. In addition, his own Rumi Songs appeared in September. It offered recordings of his musical settings of works by the 13th century poet and mystic, sung by mezzo soprano Tora Augestad. The saxophonist Haltli and violin-cellist Svante Henryson provided accompaniment. In 2017, he formed his "Helsinki Quartet" with Norwegian bassist Mats Eilertsen, Estonian pianist Kristjan Randalu, and Finland's Markku Ounaskari on drums. Together they recorded Helsinki Songs with producer Manfred Eicher in Oslo's Rainbow Studio in January of 2018. The set featured all-original tunes composed (mostly) in the Finnish capital, that offered tributes and dedications to Igor Stravinsky, Jimmy Webb, Ornette Coleman, Bill Evans, and his bandmates. Helsinki Songs was issued in mid-July followed by a European tour. ~ Thom Jurek, Rovi