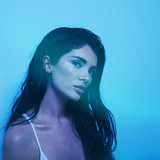 Albanian-Kosovar pop singer/songwriter Era Istrefi broke internationally in 2015 with her Top 40 single "BonBon," later reaching an even wider audience with the 2018 World Cup anthem "Live It Up." Born in Pristina in the former Yugoslavia, Istrefi debuted in 2013 as simply Era with her single "Mani Per Money." Blending pop and reggae in the style of Rihanna and Sia, the track hit in Albania and Kosovo, as did the 2014 follow-up, "E Dehun." "Njo Si Ti" appeared in 2015 and charted in the Top 40 in Belgium, and by the end of year she released the dance-pop track "BonBon," which became an international viral hit, charting across Europe and in Australia and the U.S. After the track reached 96 million views, the Ultra label signed Era and re-released "BonBon" internationally in 2016. The next year, she issued "Redrum" with production by Felix Snow and "No I Love Yous" with Moroccan MC French Montana. In 2018, she was recruited alongside Nicky Jam and Will Smith for the official FIFA World Cup anthem "Live It Up." ~ David Jeffries