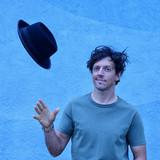 Jason Mraz’s new album begins and ends with the same phrase: “Look for the good.” Those four words are not just a lyric or the title of his seventh studio album, but also an all-encompassing world philosophy for the musician, who believes that in dark and challenging times we should search for something positive. Look For The Good, written and recorded in Jason’s home studio in Southern California, is a continuation of his career-long love for reggae music. It’s a genre he’s always returned to, inspired both by its rhythms and its revolutionary lyrics, and after making 2018’s Know. the singer found himself ready to further explore how he could participate in the style. He connected with producer Michael Goldwasser of Easy Star All-Stars, who curated a nine-piece studio band (including several of Jason’s mainstay musicians), and the group decamped to Jason’s home and studio, which is modeled off Bob Marley’s house on Hope Road in Kingston. The recording process lasted two weeks and resonated with good vibes. The musician also runs the Jason Mraz Foundation, which has donated over $1 million to organizations supporting inclusive arts education and equality. In many ways, Jason, a two-time Grammy winner, Songwriters Hall of Fame Honoree and board member of the ASCAP Foundation, aims to use his position to empower others and inspire real-world change and positivity. Look For The Good is not just an album – it’s a refreshing way of seeing and experiencing the world we live in.