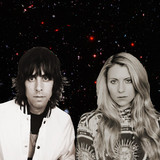 WORLDS is the musical partnership of Erica Driscoll, the Brazilian-American songstress and voice behind indie-pop royalty Blondfire, and Anthony Polcino, who currently churns out colorful, heady psych-pop with his solo project Antoine Diligent. While Polcino was filling in on guitar duties for Blondfire throughout 2016, he and Driscoll began collaborating on the side due to a shared love of like-minded influences, citing British, Brazilian, and Italian dance, new wave, and rock music of the late 1970s and early 80s as major beacons of inspiration. After several successful writing sessions combined with the added shall we say, fondness of a mutually enjoyed cannabis strain, WORLDS was officially conceived. With the help of multi-platinum producer Wally Gagel (Zella Day, Best Coast), the chock-full-of-attitude debut single from WORLDS, the brazenly entitled "Good Shit", was released worldwide on September 1st 2017 via WAX LTD Records.