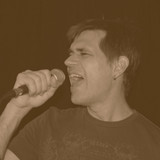 Jo Oliver has been making a living from music in the widest sense for many years. He studied guitar, played in many band-projects and gave guitar lessons, made jingle productions & wrote editorial articles for music magazines and made his living in this way in the earlier days. For many years he wrote, composed, arranged and produced songs for various artists and contributed to many different music productions as songwriter, studio-musician, arranger and / or music producer with some chart placements. During these many years of his professional music independency there were quite a number of co-operations and also publications with other artists, publishing houses and labels. For example, he played guitar in the band of Keith Tynes / former Platters, wrote songs together with Richard Palmer-James / former Supertramp and published songs for film music at “crucial publishing” / USA. Before he worked as a live & studio musician and music producer in Germany (where he comes from) while nowadays he primarily writes music textbooks and publishes his works as an independent music publisher. Today he is largely a self-marketing musician. While in the last years his musical work took place in the background, he is now breaking completely new ground as an artist performing his own songs! Thank to all the people who encouraged him to take this step! More information: www.jooliver.net PS: Jo Oliver is also songwriter/producer for other artists such as „Gliffo“ e.g.!