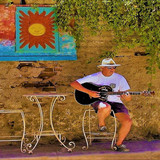 Gary Baugh is a singer/songwriter that writes what he wants. " I know there is a "punch 'em out format" that sells well, but I just want to write what I like. If it doesn't conform or make a chart, that's okay. I want to "like" my song when I play it on stage years from now". He adds, " It's important to me that each of my songs are different from each other. I like the variety." Not a big surprise if you ever have a chance to listen to his own shuffle playlist: from Stevie Wonder to Keb Mo, from Counting Crowes to Ricky Nelson, from Tony Bennett to Alabama Shakes, he is all over the map. Being a baby-boomer, Gary was exposed to music all his life at home and soaked it all up. “My parents use to accuse me of hibernating in my room, but I just wanted to absorb each new song and sound I heard. I was amazed with Gordon Lightfoot, The Allman Brothers, The Eagles, The Mammas and Pappas,

Buffalo Springfield , Led Zeppelin, Jim Croce and of course, The Beatles. The 60’s and 70’s were a magical time in music. I was awe struck with the variety and wanted to see if I could write a song. Never did I think that one day I would meet Gordon Lightfoot and Ringo Star or share the stage with some of my ultimate musical heroes. I was just very lucky.” From his early beginnings in the 70's opening for Bonnie Raitt, Fleetwood Mac, Dave Loggins and others, Gary songs continue to tell their own unique story.