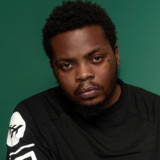 Olamide Adedeji, known as Olamide is a Hip-Hop recording artist/songwriter signed to his record label YBNL. Born and raised in Bariga Lagos State, he began his music career professionally in 2010, when he worked with ID Cabasa's Coded Tunes record to release his debut single ‘Eni Duro’ and his debut studio album in 2011 titled ‘Rapsodi’. The following year, he started his own record label ‘YBNL Nation’ and released his 2nd album ‘YBNL’ in November 2012 under his imprint YBNL Nation. The album had hit singles ‘First of All’, ‘Voice of the Streets. His 3rd solo album ‘Baddest Guy Ever Liveth’ was released in 2013. The album had the hit single "Durosoke". Olamide released his fourth album titled ‘Street OT’ in late 2014, preceded by the singles "Story for the Gods" and "Goons Mi". In 2015, He released two albums, a collaborative album with rapper, Phyno titled “2 Kings” and later ‘Eyan Mayweather’. The album had the singles; "Bobo" and "Lagos Boys". His 6th studio album ‘THE GLORY’ was released in 2016. It was the No 1 selling album on Billboard’s world album chart and it made him the first and only Nigerian rapper in history to have released 6 studio albums and one collaborative album in 6 years. In 2017, Olamide released his seventh studio album ‘Lagos Nawa” which had the smash street anthem “Wo”. His success in the entertainment industry has earned him several awards including Best Rap Album and Album of the Year, Best Male Artiste in Africa AFRIMA and numerous other awards.