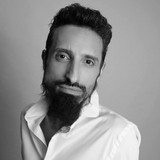 Daniel Zamir is a saxophonist, vocalist composer, and bandleader. Though he often plays alto, the soprano horn is considered his primary instrument. His blend of modern jazz draws as much from klezmer, liturgical, and Hasidic traditional music, the rhythms of India and West Africa, as it does from jazz. Born in 1980 in Tel Aviv, Israel, Zamir was drawn to the sound of the saxophone at a young age and began studying the instrument at the age of 12. Hearing Charlie Parker for the first time had a great effect upon him, and from that point on, he focused on music studies. Zamir attended a Tel Aviv high school that specialized in the arts and offered an intensive music program. In addition to the music of Charlie Parker, some of Zamir's early influences include Eric Dolphy, John Coltrane, Ornette Coleman, and Pat Metheny. Zamir formed a trio called Not for Sale and eventually started listening to other musicians, as well. Of those he heard, Zamir was most impressed with saxophonist and experimenter John Zorn. In late 1998, he relocated to N.Y.C., where he met percussionist Kevin Zubek and bassist Shanir Ezra Blumenkranz with whom he formed SATLAH, as well as well-known N.Y.C. musicians including Zorn. Zamir has also worked occasionally with members of the downtown scene, including Jamaaladeen Tacuma, Marc Ribot, and Calvin Weston. SATLAH's self-titled debut was released in March 2000 on the Tzadik label (with a guest appearance by Zorn. It was followed by Exodus in 2001 and Children of Israel (the latter also featured guest saxophonists Anat Cohen, Paul Shapiro, Ned Rothenberg, Marty Erlich and Doug Wiselman ads well as Zorn). 2002 was also the year that Zamir finished his studies at the New School where he received a B.A. in jazz performance.

In addition to recording, he had been touring Europe, the UK and the US. In 2003 he performed at the Israel Festival in Jerusalem, and co-produced Great Jewish Music: Sasha Argov with Zorn. The saxophonist toured America with fellow Hasidic musician, Matisyahu. It proved a pivotal for him. Zamir returned to live in Israel in 2004 and released the album Zamir Sings (Pop!) on the Israeli Hatav Hashmini label.