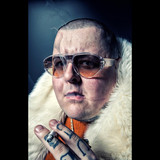 Through years of hard work and dedication, Merkules has earned the respect of artists and fans around the world. His raw talent, wit, and genuine humbleness has captivated a fanbase that is growing by the thousands daily. Merkules graduated from 7-figure YouTube remixes to collaborating with Hip-Hop icons including The Game, Bone Thugs-N-Harmony and DMX to name a few. Based on the 75 million streams Merkules garnered from Trust Your Gut, Cole, and Special Occassion between 2017-2019, it would seem fans just can't get enough of Merk's signature style of "hangover rap". Fans gravitate towards Merk's witty wordplay, no nonsense tone, and masterful delivery. Recently, Merk attained unprecedented levels of mainstream exposure as well. In late 2020, the song Bass ft. Hopsin & Tech N9ne was featured on the remastered video game Tony Hawk's Pro Skater 1 + 2. Furthermore, while promoting Apply Pressure, Merkules made an impactful appearance on Dr. Phil where he offered assistance to an aspiring rapper on the condition the youngster would stay clean. Merk's well-documented battle with sobriety is an inspiring story that continues on a day-by-day basis. A 30 day self-induced hiatus in rehab brought Merk even closer to his fans who are supporting him on his new found path of sobriety. www.merkulesmusic.com