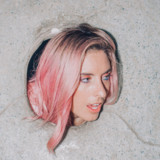 Merpire, the moniker of Melbourne-based artist Rhiannon Atkinson-Howatt writes music living somewhere between the rom-com and horror movie sections in her mind. Off the back of her independent, debut EP release in 2018 Merpire signed to indie management company Fright Night Music, showcased at Bigsound and sold out her Endless Chatter EP tour. By the end of 2019, Merpire had accrued an impressive list of supports including Julia Jacklin, Paul Dempsey, Angie McMahon and Gengahr. Merpire’s captivating and predominantly female band has landed her a slew of Australian festivals (A festival called PANAMA, Brunswick Music Fest and featuring with RAT!hammock at Laneway) with their live show flowing between intimate pop ballads and fully immersive alt-indie heart-shakers. With three national tours cancelled due to the pandemic, Merpire continues her ever-present resilience. 2020 instead saw Merpire co-founding the online streaming festival Isol-Aid, writing and releasing a prom-themed EP as new band Wilson's Prom with her producer and band mate James Seymour as well as finalising her debut album ‘Simulation Ride’, which has just been signed to ADA Records. The album was completely co-produced and mixed alongside James Seymour whilst living out the theme within the album - looking for positivity in anxiety. Merpire continues on her enchanting upward trajectory while her eagerly awaiting fans can expect new music in early 2021.