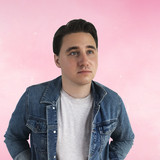 London-based singer, songwriter and producer Clinton Janz (aka CLINTON) grew up surrounded by music. Born to a German mother and Canadian father - a professional musician (US Billboard Charts, Top 10 Canada), he spent his childhood in southern Germany. Following in the footsteps of his brother (Swiss Superstar, German music awards) and his sister (collaborations with musicians such as Stevie Salas, Guy Pratt; Top 100 Airplay USA), CLINTON started getting more and more involved in music. At the age of 19, CLINTON formed a band with a couple of friends. They wrote their own songs to then be performed live – this gave CLINTON a first taste of being an artist. After moving to London to attend University, he went on writing and producing music for other artists and advertising campaigns. This included an advert by Barry M, using his music for an advertisement on national British television. In the meantime, several of his compositions are being airplayed throughout Europe and he just released his new single "One Of A Kind" with Brazilian DJ RQntz.