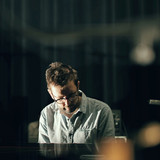 Marble Sounds, the band founded and fronted by Pieter Van Dessel, has been a household name in Belgian music for more than 10 years. Not bad for a band that, rather than sticking to one sound, tries to explore new musical grounds. 2021 marks another turning point for the band, teaming up with a new label and booker, and taking their musical evolution even further. First single ‘Quiet’ sets the tone and hits the mark: its gorgeous piano, strings and vocal harmonies take the listener on a trip to a wondrous universe, where the likes of Sufjan Stevens, Damien Jurado and Ólafur Arnalds also roam. The fans are over the moon, the press are lyrical, and the song is all over the big radio stations in Belgium, the Netherlands and France. It even plays an important role in the new season of the acclaimed Netflix series ‘Undercover’. Follow-up single ‘Never Leave My Heart’ is another indication of what the highly anticipated new album is going to sound like. Kicking off with a gentle piano and Van Dessel’s hushed, warm voice, the song flows into a wonderfully lush orchestrated indie pop gem. This is the new Marble Sounds: masterly arranged songs that enchant with breathtakingly beautiful melodies and choruses. And, of course, the touch of melancholy that is never far away in the music of Marble Sounds. This kind of beauty leaves us longing for 2022 and the release of Marble Sounds’ fifth album.