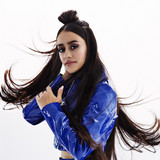 Violeta Bozanic age 15, winner at the WCOPA 2018, World Championship of Performing Arts competition is about to release her debut album "It's You" with 7 songs recorded with Grammy Winning producer Jeffrey Weber and Grammy Winning recording and mixing engineer Clark Germain at United Recording Studio in Hollywood. Born in Sydney Australia Violeta began singing at age 6 and 3 years later she taught herself to play piano and guitar. At age 10 Violeta won Junior Talent Quest Australia. At age 11 Violeta made it to the semi-final of Australia's Got Talent being in the top 30 finalist. She began writing her own music at age 10 and her first original song "Moving Pictures" , which is featured on Music Matters International Charity Album received a Highly Commended Award and placed in the top 4 at the Australia's Children's Music Foundation's ACMF Song Writing Competition. Violeta's second original song "Baby I am Sorry" has received an Honourable Award being grand finalist of ISC for 2016 and is play listed on APRA AMCOS website. Violeta's 3rd song "Save This World" has also received Honourable mention being grand finalist of ISC Unsigned Only Competition for 2016.

As a vocalist, she has been winning talent contests for many years