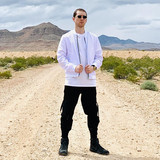 Mason Andrew Shinrock was born July 19, 1996 in St. Joseph, Michigan. In his adolescents, Mason had many musical influences including Eminem, Drake, The Weeknd, Akon, and the Black Eyed Peas. As he grew up, his natural athletic ability led him to pursue sports as his outlet. Eventually, he picked Football as his main focus. Mason received attention at the wide receiver position from schools like Penn State, Western Michigan, Central Michigan, Eastern Michigan, and Valparaiso. While he did receive walk-on opportunities, he didn’t receive the scholarship offers he hoped for. This led Mason to attend Midwest Prep Academy in Chicago in the fall of 2014 after graduating from high school. The following year Mason attended RCTC, a junior college in Rochester, Minnesota. It was in the spring of 2015 before attending RCTC that Mason found his musical talent that sports had pushed to the background. Mason, in the first week of practice at RCTC, got a concussion that would redshirt him for the entire season. Mason would spend that time writing and reciting raps in his room when he was on concussion protocol. Eventually, he realized his love for music had surpassed his love for football. Mason decided to head back home to Michigan to pursue his music career. Two years of practicing and releasing songs later, Mason received attention from Poze Productions in Chicago. Poze would earn him his first deal, and he signed a production/distribution deal with Bentley Records in May of 2017.