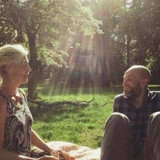 Marte Schau: Vocals, keys,harmonica . Mikael Fleron: Beat, sax, keys. www.megafonmusic.com Marte and Mikael's musical melting pot began in the Copenhagen underground scene in the nineties. She was fascinated by Bulgarian music, had learned Bulgarian vocal techniques, and she hated the saxophone. He played saxophone, avantgarde jazz, and was inspired by Middle Eastern music. They met in a band called Kantaloop .Ethno-electronic rock music inspired by Portishead . This marked the beginning of Marte and Mikael's long musical, geographical, and spiritual journey. MEGAFON released their third album, ”TRISKAIDEKAMANIA” Friday 13th June 2014. - The title is a rewrite of the expression triskaidekaphobia – a morbid fear of the number 13. MEGAFON are the witches of our time, but they will never burn on anyone's bonfire, because time and again, they face the fear of the unknown, and the fear of the mysterious, and thereby gain new musical heights. - Every 13th actually. The project was realized in a slightly different manner: Every 13th a new single was published until Friday 13th June, when the entire album was released - the nine Singles + four new tracks - a total of 13 tracks. - After a long break, new tracks are being made. coming up summer 21.