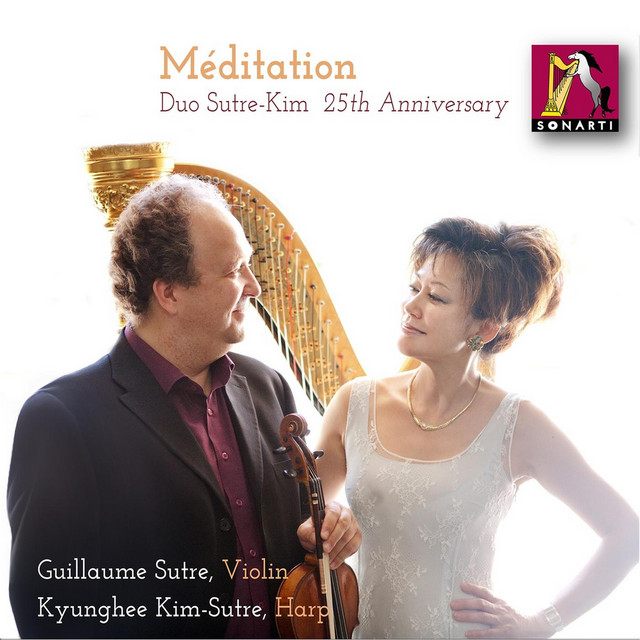 The Duo Sutre-Kim, formed in 1991, was founded in Paris by violinist Guillaume Sutre, founding member of the Trio Wanderer and first violin of the Ysaÿe Quartet, and harpist Kyunghee Kim-Sutre, first prize winner of the Elizabeth Herbert Hobin Competition and graduate of the Curtis Institute of Music and the Conservatoire Supérieur de musique de la Ville de Paris. Since winning first prize at the Chamber Music Competition Lily Laskine, the Duo has performed in Europe, the United States and Asia. Through extensive research of musical libraries and the commissioning of French, Korean and American composers, the Duo ceaselessly explores and expands their repertoire of original pieces written for violin and harp. Some of their performances have been broadcast by the channel Muzzik (Festival Ravel in 1998) and Arte TV (Flâneries Musicales de Reims 1999). Their recent Sonarti CD, The Paris Years (1801-1805), devoted to the chamber music of Austrian composer Joseph Woelfl, was lauded by musical critics, including the Diapason magazine with a 5 of Diapason. Inspired by their original cultural backgrounds and their many travels around the world, Kyunghee Kim-Sutre and Guillaume Sutre offer original thematic programs, and often collaborate with musicians such as Ronald Leonard, Sung-Won Yang, Jocelyn Aubrun, Pascal Moragues, Romain Guyot and the Ysaÿe and Voce Quartets.<br>