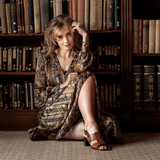 Lighting struck, the first time Tess Merlot heard Jacques Brel. From that moment on, music was all around.

She formed the band Tess et les Moutons and after playing hundreds of shows, the essence remained: allowing the human soul to reach the surface the way only French torch songs can. With original songs from Brel, Piaf en Aznavour and her own catalogue. Motivated to share her passion and unite cultures, Tess released her first EP Chansons pour non-francophones in 2017. In 2019 she enchanted a jam-packed Paradiso with her song ‘Mon Paris’. In 2020 she toured the country with her Moutons, selling out venues such as PAARD in The Hague and TivoliVredenburg in Utrecht. Whether she takes the stage with her band or solo under the name of Tess Merlot, an irresistible joie de vivre is a given while chansons in their purest form are sprinkled across the room. Sometimes it’s stripped down and pure, other times grotesque and bold. Whatever it takes to do them justice. And every time Tess allows the chansons to do their work, magic appears: sing-a-longs, a tear here and there and pure bliss. In short: Tess Merlot is the perfect addition to any room that doesn’t mind a little wine getting spilled.