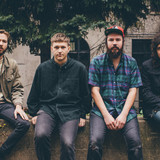 Chicago-based indie rock band NE-HI formed as a favor to a friend who needed a film scored. The four members of the band -- guitarist/vocalists Jason Balla and Mikey Wells, bassist James Weir, and drummer Alex Otake -- wrote some songs, but when the movie never came together they decided to start a band instead. Based around Animal Kingdom, a D.I.Y. basement space on the city's Northwest Side, the foursome took their scrappy sound -- suggesting Wire if they were signed to Flying Nun or Rain Parade if they released singles on Postcard -- to stages around the area, building up a loyal following along the way thanks to their energetic performances and catchy songs. Their self-titled debut album was recorded quickly by Dave Vettraino at Public House Recordings during the fall and winter of 2013, with the band often using first takes and getting a very live sound. It was released in March of 2014 by Manic Static and garnered critical acclaim. The band continued playing shows, including tours with Twin Peaks and Car Seat Headrest, and started working on a second album. The process proved more difficult this time around as Balla and Wells struggled with the songwriting duties and the group's first attempt at recording said songs resulted in the sessions being mostly scrapped. When they returned to the studio to try again after more touring and writing, they did it with a renewed sense of confidence. Working quickly and recording everything but the vocals live, they were able to get the results they wanted. The album, Offers, was released by Grand Jury in February of 2017. ~ Tim Sendra, Rovi