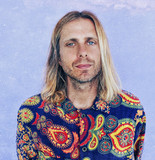 Formed in 2010, Aaron Bruno, the songwriter and architect behind AWOLNATION, wrote and recorded one of the most influential songs of the previous decade with the chart-topping, record-breaking track “Sail.” The first single off the platinum Megalithic Symphony (2011), “Sail” is certified Diamond (10 million) and holds the record for the most weeks on the Billboard Hot 100 chart by an independent artist, the second longest for any artist.

The debut album also produced the Gold certified “Not Your Fault” and two other Top 10 US singles.