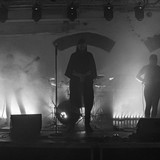 OGHRE is a 5-piece metal band that debuted with the album Gana in 2017 which was subsequently nominated for the Annual Latvian Music Recording Awards in the category “Rock or Metal Album”. Performances during this album era also warranted other awards such as “Latvian Metal Music Award” in category “Debut of the Year” and “Heavy Band of the Year” from the now defunct pub Aptieka. They have now put out their sophomore effort Grimt which serves as the second entry to an album trilogy.