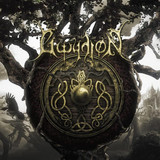 Gwydion's journey started in 1995 with 3 demos presented to the Portuguese metal scene and dozens of gigs performed throughout Portugal. In 2007, Gwydion recorded their 1st full-length album Ynys Mön, through German label TROLLZORN. With this, they received an invitation to participate in the RAGNAROK AASKEREIA'S TOUR with top bands TYR, HOLLENTHON, ALESTORM, and SVARTSOT In 2010, Gwydion released their 2nd album Horn Triskelion. Truly representing 15 years of accumulated experience and ideas, the readers of Portugal's biggest metal magazine "LOUD!" chose GWYDION as the 2nd best band of 2010 and their album "Horn Triskelion" was considered the 3rd best album of the year! In 2013, Gwydion presents Veteran.

With a strong mixture of heavy metal riffs and epic/folk songs, "Veteran" is a story of a warrior from his birth through his training, conquests and defeats with relevance to the History of Portugal. "Veteran" was nominated by Metal Storm website for best Folk Metal album of 2013! After a band hiatus and with a new formation, Thirteen was released on 2018 telling more epic stories and the passage of the northern people through Portugal, reconquering Gwydion's place in the Epic Metal genre worldwide In 2020 Gwydion brought to the table their most eclectic and experienced album simultaneously commemorating their 25th anniversary as a band. Heavily inspired by the Book of Taliesin, returning to their roots of Celtic storytelling, promising a strong and diverse album!