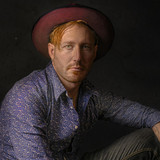 Joe Marson is a gypsy soul with a calling to make music he refers to as 'Electric Soul Magic' . He's been putting all of his experiences into lyric and song ever since he was a young world traveller. He creates timeless music that bridges the gap between the influential decades that inspire his songwriting. These elements can be heard in some of the songs he's had placed in major films like Marvel's Deadpool as well as popular television series like FX's 'Justified' and Netflix's original series 'Bloodline'.