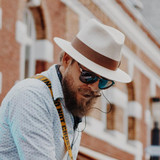 Bent Rushmore is an Estonian blues and electronic music artist. Known as a lead guitarist from the popular band Köömes.  Estonia was part of communistic superpower Soviet Union at the time when Bent grew up. Popular western music like disco and rock’n’roll was forbidden in the country during that time. These music styles had gone underground. Bent’s father worked as a taxi driver by day and a vinyl record smuggler during nights. This meant that he bought LP’s from foreigners visiting the country, recorded the music on cassette tapes and secretly sold the recordings to local DJ’s and music lovers. This used to be a good source of extra income during the times. This is where the love for music of all genres was formed.  While music of various genres was a part of Bent’s everyday life, playing an actual instrument came much later; in 2005 when he got an electric guitar and co-founded a rock band called “Köömes”.  Köömes is now a 6 person rock band with 4 studio albums as it’s discography. While Bent is co-writing music for Köömes, he has also continued to write music on his own as a solo arist. His first solo album “Soi Dog” was published in 2017.  In 2018 Bent started to flirt with keyboards, synthesizers and electronic music production. This resulted in publishing a meditative album “Steps to Calmness” in 2019.   Now the musical journey continues. Bent is writing new music all the time and new release will soon follow in both, blues and electronic music genre.