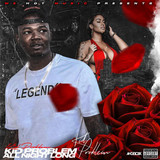 Hailing out of New Jersey, home of the iconic Rappers like Queen Latifah, Naughty by nature, Red Man and many others that contributed great music in the hiphop world and paved lanes for up & coming Artist like Kid Problem. KID PROBLEM as he calls himself straight outta Irvington ,he considers himself more of an all around entertainer.his influences was the likes of : Lil. Wayne, Tupac, AZ, BIG L, Big Shawn and others. He also has a thing for the new drill type of music originated out of Chicago Artist like the late FBG Duck, Lil Durk, King Von, Chief Keef, etc. in his current catalog include “All Night Long" 1st single for the ladies Mr.All Night Long himself let the ladies know he can go all Night.currently now on a radio campaign promotion in rotation on many internet/satellite/college radio. New video out now "spin the block" giving the audience that gritty Chicago drill feel like makes kid Problem a problem for the underground and commercial world his talent will definitely make his mark in the music world. Instagram with thousands of followers he wants the world and every ethnic group to adapt to his music and see him as an all around entertainer his goal is to be that next rapper out of New Jersey and put his city on the map. For more information on kid Problem follow: Instagram @1kidproblem YouTube @1kidproblem Spotify single link👇🏾 https://open.spotify.com/album/1KSKij5kRI9po5EoF9sigA Contact Instagram @internationalfive Wehotmusic1@gmail.com