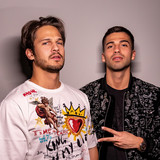 Italian brothers Alessandro & Andrea VINAI are two producers that started their career in 2011 conquering the worldwide scene with catchy edm songs, their genre is known as 'Big Room Bounce'. From the beginning of their career they scored few times the Beatport number 1 chart with songs like 'Raveology' with DVBBS , 'Bounce Generation' with TJR and 'How We Party' with R3HAB . Following to these records they also released music and collaborated with artists like David Guetta , The Chainsmokers, Dmitri Vegas & Like Mike, Steve Aoki, Hardwell, Redfoo and many many others.