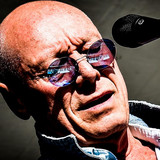 About Tony O'Malley Tony O’Malley’s distinctive vocals and funky piano playing have always been key to the sound of UK Soul Pioneers, @Kokomo.   These skills come to the fore with his own band, in which he’s accompanied by some of Britain’s brightest young talent: @Richie Aikman on guitar, @Sonny Winslow on bass and @Ally McDougal on drums.   The average age increases when they’re joined by fellow @Kokomo founders, the “guitarists’ guitarist” @Neil Hubbard if he’s not on tour with @Bryan Ferry, and sax man @Mel Collins, if not on duty with King Crimson.   The influence of greats like @Ray Charles, @Aretha Franklin, @Stevie Wonder, @Richard Tee and @Steely Dan is plain to hear in his eleven solo albums. But Tony’s own style, energy and personality shine through in every show, whether on a festival stage or in an intimate jazz club.