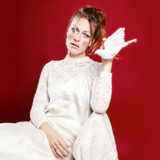 We know Charlotte Brandi as singer, guitarist and keyboardist in the hugely successful Berlin indie duo Me And My Drummer. The band released two EPs and two albums, whilst establishing themselves as one of the finest live acts the German indie scene has to offer. Everything went swimmingly for eight years, until the band reached its logical terminus: both members can now take the time to develop projects beyond the confines of the band. Charlotte Brandi began working on her solo debut in 2015 whilst nursing a broken foot on her parents’ sofa. “The Magician” is an absolutely stunning album, uncompromising to a fault: the quality of the arrangements is sensational, underpinned by lush instrumentation and elaborate sounds. The piano is at the heart of everything. There was a piano in the family’s living room in Dortmund, the town where Charlotte Brandi was born and grew up. When she moved to Cologne, then Tübingen and ultimately Berlin, the piano stayed behind. She has found an old, restored piano for her apartment, an instrument with a history of its own, now helping her to tell her story as she finds her way back to her fundamental, innate language. In 2020 Charlotte Brandi released her first songs in German language. The critically acclaimed EP AN DAS ANGSTLAND is out now.