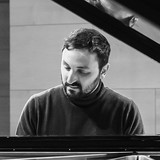 Lluis Capdevila grew up by the vineyards of PRIORAT, near the Mediterranean Sea (Catalonia, Spain). Freedom of expression and creativity soon connected him to improvisation and composing. Jazz music brought him to New York, where he attended the Aaron Copland School of Music with the help of a Fulbright grant. He eventually received a Doctor of Musical Arts degree from Stony Brook University. In local Manhattan venues he has shared the stage not only with established musicians Ray Anderson, Ugonna Okegwo and Elliot Zigmund but also with emerging talents Stan Killian, Bryan Copeland and Kush Abadey. DIASPORA (2016) was his debut album featuring original compositions supported by the talents of Petros Klampanis (bass) and Luca Santaniello (drums). DAYBREAK EXPLORATIONS (2018) are free improvisations recorded during (2013-16) at the Staller Center Recital Hall in Stony Brook (New York). CINEMATIC RADIO (2019) is an ambicious recording done with master technicians James Farber (mix) and Greg Calbi (mastering), featuring Petros Klampanis (bass, loops) and trumpeter extraordinaire Tom Harrell in one tune. Now, with ETIM (2020) Lluís goes back to his roots found in Falset (Priorat), settling him and his grand piano for seven months at the local Cooperative Winery in order play for aging wine. This winemusic project also seeks to explore how wine and his music communicate, through a research team who monitors how the wine exposed to him gets affected.