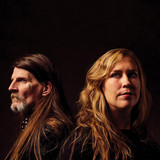 For nearly 30 years, Earth's Dylan Carlson, its lone constant member, has inhabited a uniquely elastic role in rock. From the very beginning, Earth has been both an exponent of experimental drone-based guitar music and a signature practitioner of the detuned riff inspired by Black Sabbath’s Tony Iommi. They remain a singular entity, even though bands such as Sunn 0))) and Boris credit Earth's influence as inseparable from their existences. The only constant in this band's aesthetic is change, an odd point of irony given that their recorded music relies on heavy yet hypnotic forms of repetition. They virtually created the drone and ambient metal subgenres with their glacial, monolithic exercise Earth 2 in 1993. It arrived (already an outlier) as it hailed from the Pacific Northwest at the dawn of grunge. A series of albums through the rest of the decade cemented that reputation. Earth went on hiatus after 1996's Pentastar: In the Style of Demons due to Carlson's massive personal problems including heroin addiction. After getting sober he re-formed the band with drummer Adrienne Davies in 2003, and in 2005 delivered the arid, brittle yet melodic, psychedelic rock, Gothic Americana, spaghetti western-influenced Hex: Or Printing in the Infernal Method. The band built upon and morphed that record's schematics for a decade, exploring spaces between notes and lingering vibrations. A decade later, they ventured into heavy yet meditative rock with Primitive & Deadly before 2017's Concrete Desert, a collaboration with Kevin Martin (aka the Bug), the king of brittle breaks and left-field sonics.

The band was originally formed in 1990 in Olympia, Washington by Carlson, Slim Moon (who later founded the Kill Rock Stars label), and Greg Babior. Moon and Babior left soon after and were replaced by Joe Preston. Earth played a few live shows and then recorded some material with Mike Lastra. After opening for L7 in Seattle, the group was approached by Sub Pop Records, which released the recordings in 1991 as Extra-Capsular Extraction. The following year, Carlson and Preston recorded Earth 2 with producer Stewert Hallerman, but Preston left soon after the album's release. Sub Pop was unhappy with Earth's lackadaisical recording tendencies, and the label pulled the plug on 1993 sessions for the third album. Recording resumed the following year with producer Ian Dickson (who would become a permanent member just one year later), engineer Scott Benson, and drummer Rick Cambern. Phase 3 was finally released in April 1995. A live album taken from a Blast First label concert was released the same year as Sunn Amps and Smashed Guitars. Sub Pop surprisingly re-signed Earth for three more albums early in 1996, and Carlson recorded a new album, Pentastar: In the Style of Demons. The album showed a more stabilized band with the addition of guitarist Shawn McElligot and drummer Mike McDaniels. After a small series of live performances following the release, Earth quietly disbanded with virtually no public acknowledgment of the split. A live album appeared in 2000, followed the next year by a series of demos (one including a vocal from the deceased Kurt Cobain) issued with a CD version of the Sunn Amps EP. An Earth video titled A Bureaucratic Desire for Revenge was also available from Sub Pop. Earth returned in 2002 for a series of live shows in the U.S. and Europe, this time as a two-piece with Carlson and drummer Adrienne Davies. That lineup was featured on 2005's Living in the Gleam of an Unsheathed Sword. The album was recorded live, with its title cut lasting nearly an hour. Earth returned that September with the more ambitious Hex: Or Printing in the Infernal Method, which suggested the sound of a drone metal band covering Giant Sand or Scenic. The year 2008 saw the release of Hibernaculum, which offered four long songs, three of which originally appeared on earlier recordings but were performed on this set via the new Earth sonic aesthetic. It also contained a DVD featuring concert and interview footage from the Hex tour. The Bees Made Honey in the Lion's Skull appeared in 2009, and took the latter-day Earth sound into even more hauntingly abstract and cinematic directions. In 2010, Southern Lord released A Bureaucratic Desire for Extra-Capsular Extraction, a remastered compilation containing the complete 1990 Smegma Studios sessions -- their earliest recordings -- previously only available separately on Extra-Capsular Extraction and Sunn Amps & Smashed Guitars. Carlson resumed the experiments he began back on Hex: Or Printing in the Infernal Method with the first part of a projected trilogy entitled Angels of Darkness, Demons of Light, Vol. 1 arriving via Southern Lord in 2011. Somewhat different in approach, Angels of Darkness, Demons of Light, Vol. 2 arrived in early 2012. The equally diverse Primitive and Deadly, which featured the talents of guest vocalists Mark Lanegan and Rabia Shaheen Qazi (Rose Windows), dropped in late summer 2014. Later that same year, Earth teamed up for a collaborative 12" single with electronic artist Kevin Martin (aka the Bug). The single was made available as a special Record Store Day release. They joined forces again for a special release in 2017, Concrete Desert. Two years later Carlson stripped the band's sound back to a basic duo with only drummer Adrienne Davies as a collaborator for Full Upon Her Burning Lips. They focused more on percussive sounds as the hub of the warped wheel Earth churns on while retaining the cinematic scope of earlier recordings. ~ John Bush, Rovi