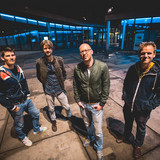 2007; Hot Griselda hit the folk scene by surprise and hit it hard! In no time the band establishes a big fan base all over Europe with their unique progressive sound. Highlights such as Rudolstadt Festival in Germany, Le Son Continu in France and Gooikoorts in Belgium are only a few examples of their many successful festival appearances. Existing out of four highly skilled musicians based in Belgium and The Netherlands, Hot Griselda proudly represent what the lowlands really stands for; an open-minded cultural region, with artists who knead their tradition into a sound that rather represents the future then the past. Kaspar Laval’s airtight bouzouki playing along with Jeroen Geerinck’s ultra deep guitar and bodhran grooves are the rhythmic backbone of Hot Griselda’s powerful sound. On this massive foundation, Stijn van Beek and Toon van Mierlo lay out a myriad of melodies. Their latest album "Sunbox" (July 2018) is a purified collection of tunes that are the result of making music together for over 10 years.