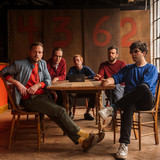 “I feel like I’m in a totally new band right now,” says Dr. Dog guitarist/singer Scott McMicken. It’s a bold declaration considering he’s been co-fronting the beloved indie outfit for a decade-and-a-half, but it cuts straight to the heart of the intense and transformative experience behind the group’s brilliant new album, ‘Critical Equation.’ Produced by Gus Seyffert (Beck, Michael Kiwanuka) ‘ Critical Equation’ is the most infectious and adventurous collection Dr. Dog has laid to tape yet, the record was born from a journey of doubt and discovery, a heavy, sometimes painful reckoning that ultimately brought the band closer together with more strength and clarity than ever before. The band has achieved remarkable success—multiple Top 50 albums; television performances on Letterman, Fallon, Conan, and more; critical acclaim everywhere from the NY Times to Rolling Stone; massive festival appearances around the world; major tours with the likes of The Black Keys, Wilco and The Lumineers; countless sold-out headline shows. They recorded ‘Critical Equation’ in LA with producer/engineer Gus Seyffert (Beck, Michael Kiwanuka) to 16-track analog tape, the album features Dr. Dog’s signature blend of quirky 60’s pop and fuzzy 70’s rock with Seyffert’s willingness to tear their songs wide open. With ‘Critical Equation,’ Dr. Dog got exactly what they wanted and more: to make music that they loved with their friends and to have fun doing it.