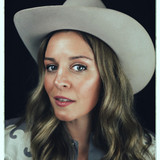 With a perspective equally influenced by her Texas roots and her Cape Cod home, Monica has emerged as one of the finest talents in the East Coast music scene. It’s clear she has a keen ability to connect; her songs are often autobiographical but delivered through a fictional approach that aids in creating a universal experience for the listener -- whether it’s expressed using her trademark sense of humor or with such striking honesty that the pain in her voice is tangible.