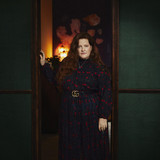 Born in Berkshire, Sophie Frances Cooke (aka Frances) grew up with an eclectic taste of music shared by her parents, listening to everything from Motown to Carole King to Radiohead. These influences contributed to Frances’ passion for music at a young age. Following her love of music and knack for songwriting found her studying at the Liverpool Institute for Performing Arts. It was here where Frances had a chance meeting with an A&R while performing at a showcase, a moment that was the catalyst for everything else that has followed. After releasing ‘Grow’ back in 2015, Frances experienced a few years that she describes as a “completely different whirlwind era” compared to where she is now. 2016 saw Frances performing at Coachella, Glastonbury and Lollapalooza, getting included in the BBC’s Sound Of, and being hand-selected for a Critic’s Choice Award at the Brits. The following year, Frances released her highly-anticipated debut album ‘Things I’ve Never Said’ showcasing the scope of Frances’ reach in pop music. The album garnered critical acclaim from The Guardian, DIY, and The Line of Best Fit and to date has amassed over 100 million streams collectively on Spotify. In the years following the release of ‘Things I’ve Never Said,’ Frances found herself penning tracks for some of the world’s biggest acts in music, like Dua Lipa, Katy Perry, Jess Glynne and Meghan Trainor to name a few. For Frances, writing for other artists was an exercise in self-awareness in songwriting.