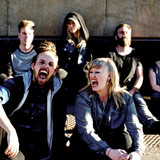 Bellaroush’s music ranges from emotive ballads to engaging, energy-laden uptempo hits, deeply rooted in reggae with an edge of electronica and hip-hop. The seven-piece band features no less than four singers whose powerful harmonies deliver hard-hitting lyrics about strength, weakness, love, solidarity, protest and revolution. The band was founded in Gothenburg in 2010 and has since the start had a vision of equality, transparency and influence. The love for music and expression through art has been inseparably conjoint with the endeavor to inspire, engage and make an impact. Bellaroush has done over 180 concerts, including 4 continental tours and 2 tours in India. During 2017, 2 new singles, 3 remixes and a music video was released. The band is currently writing &amp; recording new material for an EP that will be released in 2019, producer is Anders Lagerfors (Pale Honey). Their earlier single "Sun Goes Down" featured by rapper Promoe from Looptroop Rockers and has reached over 450 000 streams on Spotify. Gaffa Magazine: “They have an edgy fuck-of-attitude that together with melancholic, dreadlock-smelling undertones takes a hold of you.” Lira magazine: ”Bellaroush plays a new type of reggae. It's not roots or dancehall. I would like to call it future reggae... This is a brilliant debut album, not only for us devoted to reggae.” Related projects: The band's drummer has a solo project called Annelie, keyboardist is a member of Göteborgselektronikerna