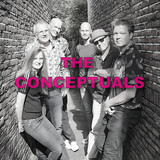 In their 20th anniversary year 2018, The Conceptuals started writing, performing and publishing original songs. Their first single ‘ Zuckerberg Sucks’ was published in May 2018 followed by the release of the EP 'concEPt 1' in June 2019. Latest tracks by The Conceptuals, released on Blue Monday on the EP called Transition! Including the cult-hit Mr Hipster. These 6 musicians, rooted in the alternative rock of the 80's and 90's, play original songs with the flavour of alternative rock, new wave, post punk. The own library is extended with indie covers from artists like The Arctic Monkeys, Editors, PJ Harvey , Joy Division, Queens of the Stone Age, The Black Keys, Bettie Serveert, etc. Find us on YouTube, Facebook, Instagram and all other platforms.