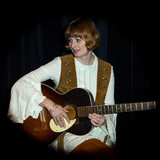 Jenn Grant was born on Prince Edward Island, the smallest province of Canada's maritimes. She's an award winning songwriter and performer, a painter and a producer. The 3 time Juno nominee's music has been described by Australia's 'The Age' as that of 'dreamy, harp-and woodwinds folk, and the work of a painter born in paradise'. She resides in Nova Scotia, where she is raising her two young sons alongside award winning producer, husband and long time touring partner and collaborator, Daniel Ledwell. Beyond the borders of city life, art and music are being born everyday. Jenn Grant has spent a decade plus releasing records and touring extensively across Canada, Europe, Australia and The United States. During this historical global moment in time, Grant has been honing her skills as a producer and videographer while releasing a slew of 'Classic Canadian Covers', building a body of abstract paintings, and in the midst of releasing her own variety show 'Jenny Town' which is premiering now, most thursday nights, on YouTube. 'A pocket sized hit of joy' and 'retro fabulous fun' says Halifax's art and culture paper 'The Coast'-

The show features performances and cyber visits from a cross section of talented folks and celebrity guests from Jenn's long-standing touring career.