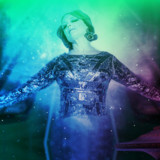 Emma Salokoski is a Finnish singer who hit Top Five success with her Emma Salokoski Ensemble in the mid-2000s and is also a member of the groups Quintessence and Q-Continuum. Her musical style ranges from jazz and bossa nova to soul and pop. Born on October 28, 1976, in Helsinki, she studied viola from ages 11 to 18 and then went to Sweden to study musical theater at Kulturama, a performing arts school in Stockholm. She subsequently performed in musicals including Rent and Les Miserables before going back to school for more studies, this time in jazz. Salokoski co-founded the jazz-funk band Quintessence in 1999. The band made its recording debut in 2001 with the White Light EP, followed by the full-length album debut Talk Less Listen More (2002) on Texicalli Records. A second Quintessence album, 5 AM, followed a couple years later (2004). Between albums, she made her recording debut as the frontwoman of the Emma Salokoski Trio with the Puutarhassa EP (2003) on Texicalli Records. Originally founded in 2000 and comprised of Salokoski on vocals plus Mikko Kosonen (guitar) and Lauri Porra (bass), the Emma Salokoski Trio subsequently expanded its lineup to include Tuomo Prättälä (keyboards) and Marko Timonen (percussion) and renamed itself the Emma Salokoski Ensemble. The group, whose style is rooted in bossa nova yet has a Finnish sensibility, made its full-length album debut in 2005 with Kaksi Mannerta. The album was a smash hit, breaking into the Top Five of the Finnish albums chart. The follow-up album, Veden Alla (2008), was an even bigger commercial success, going all the way to number two on the charts. In addition to Quintessence and the Emma Salokoski Ensemble, Salokoski is a member of the funk group Q-Continuum, which made its album debut on the Texicalli label in 2004 with Organ Kane's Quintessential Grooves. Additional releases by the group followed, including the follow-up album Q-Continuum Presents: This Is the Marienhof (2006). ~ Jason Birchmeier, Rovi