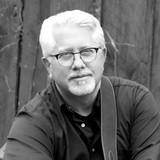 Calling Daryl Mosley a singer/songwriter is only correct in the most basic sense. Daryl is a gifted songwriter and storyteller who paints vivid pictures of life as it could be, used to be, or might have been. He’s not flashy; just a man with a guitar, a voice as smooth as molasses in winter, and some exquisitely-crafted songs that resonate deeply with people of all ages and backgrounds. Whether performing at an auditorium, festival, church, or songwriting venue, Mosley's affable personality and remarkable songs engage the listener in a way that few artists can. Country music legend Ronnie Milsap has called himself “a real fan” of both Mosley's songs and singing prowess. Legendary songwriters from Tom T. Hall to Tony Arata to Dave Loggins are among those who have sung his praises. Gospel music legend Bill Gaither said “Daryl is a poet-and we don't have many poets left.” Mosley's musical poetry has led to him being twice honored as Songwriter of the Year, seven #1 songs, and three Song of the Year awards. Other artists including Lynn Anderson, Bobby Osborne, The Grascals, the Booth Brothers, and Marty Raybon are among the many who have recorded Daryl Mosley songs.