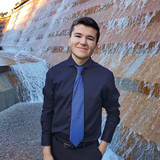 Described as "extraordinarily talented" by Houston Public Media, Tomás is a highly sought-after pianist and composer on the Houston music scene. He has played on many recording projects and is known for his ability to perform with any lineup, in any genre, for any audience, though he specializes in Jazz and Classical Music. Tomás is also an avid composer, in 2019, he scored an animated short film that won Bronze (3rd Place) Remi Winner at Houston Worldfest. That year, Tomás also released his debut single, Jubilate Deo - Instrumental Version, a multi-genre suite featuring 22 unique instrumental parts. In 2020, he released Nocturne, an experiment in musical storytelling for Grand Piano and an intimate set of strings. In October 2021, he will release his debut solo album, First Impressions, exclusively comprised of original compositions for solo piano. For performances in any genre, composition commissions, arranging, or transcribing, please contact him through www.musicbytomas.com